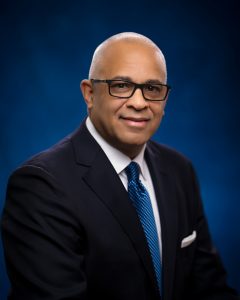 Previously, Mr. Lewis served as Deputy Mayor/Chief of Staff for the City of Detroit, serving under Mayor Dave Bing. In this capacity, Mr. Lewis managed the day-to-day operations of all city departments including the Detroit Fire Department and the Detroit Police Department. Prior to his appointment to Deputy Mayor/Chief of Staff, Mr. Lewis served as Chief Governmental and Corporate Affairs Officer under Mayor Bing. In this position, Mr. Lewis acted as the Liaison for the City of Detroit to the corporate and philanthropic communities, all educational institutions, as well as the local, state and federal governmental entities.

Mr. Lewis has more than 25 years of executive and financial management experience. He has been responsible for developing, reviewing, analyzing and implementing the strategic plans for various organizations. He brings a combination of operational and financial budgeting as well as creditor and union negotiation experience.

Mr. Lewis started his career as a staff accountant for one of the “big eight” accounting firms in 1984. Mr. Lewis then advanced to the role of a profit consolidator for the automobile maker’s credit arm

Mr. Lewis then joined a certified minority Tier 1 Automotive Supplier, as the Director of Finance in 1994. He was later promoted to Chief Financial Officer and then became Chief Executive Officer and Partner. In addition, Mr. Lewis served as President of a joint-venture with a Global multi-billion-dollar Tier-1 automotive supplier, where he was responsible for overseeing all of the sales, financial and manufacturing activities. During his time as President of this joint venture, he oversaw a successful acquisition strategy that nearly doubled revenues over a three-year period.

Mr. Lewis earned a Bachelor of Arts degree in Accounting from Michigan State University and a Master’s in finance from Wayne State’ University.

Mr. Lewis has been recognized by several entities, including the Michigan Chronicle’s Men of Excellence and Crain’s Detroit Business “40 under 40.”